Year NINE: Self-Imposed Year of Projects - Corona-what? Sure, let's have a Corona (Update #10)

No, we do not have any sort of Coronavirus at our house. We don't know anyone that has it. Right now, we're good.

Now that that's out of the way, it's Sunday and that means it's time for an update so here we are.

Nothing new to see here. Move along now, Sir. I said move along.

I didn't work on a lot this week. I pulled out my Campfire Socks and worked on them a bit but I'm pretty sure that was about it. 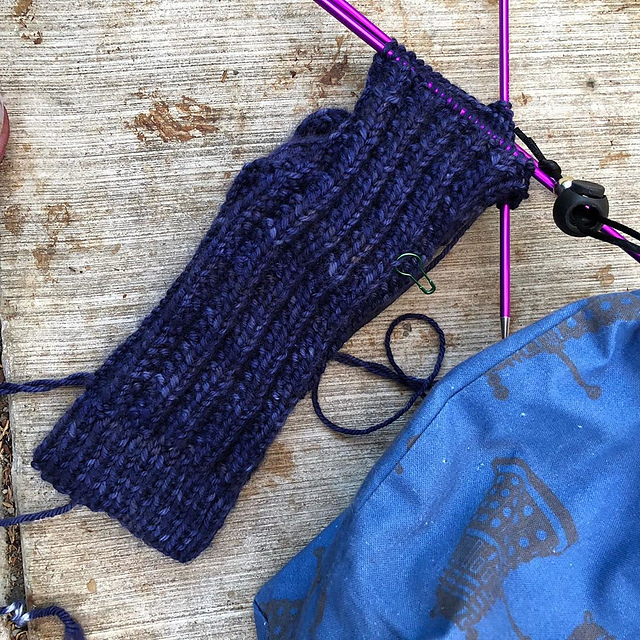 I had notes written down on my phone but they didn't make sense so I had to pull out the actual pattern to look at it. I tried to pull it from my phone a few times but the Wayback Machine doesn't like mobile, apparently. So, I was able to do it from my laptop and then things made sense and I made some progress. I took this on Tuesday at swimming lessons. I'm about halfway down the foot of the first sock.

I thought about starting another project and I did ball up some yarn for it but I haven't actually started it. I should probably get going on that one, as it's for an incubating baby...and I'd rather have it done before said baby arrives. I mean, the baby is due in June or July but baby sweaters are good for awhile while they're little.

Anyway, that was about it. I'm kind of boring this week, apparently.


The weather around here has been wonky this past week. It was warm (almost summer-like), then it got cold (back to "normal" for this time of year), and then we had rain (whaaaaat?!), and then Daylight Savings Happened and here we are.

Luckily, that's about the only thing that's been happening. We keep hearing about the Cornonavirus that's going around. I think our governor issued a state of emergency because of it. In addition to that, people are going crazy. Toilet paper, paper towels, bottled water, and all the cough/cold/flu medicines are virtually gone. I mean, we are usually stocked up but it's still shocking to go into the store and see an entire aisle empty or to go to the paper goods section of Costco and see a huge, open space. I know it's not like that everywhere (checked in with friends that live elsewhere) but it's bizarre here. I know a couple of the schools were extra-cleaned over this weekend due to a couple of exposures. For us, it's status quo except for gatherings (like spring concerts or parent education meetings). We're not particularly worried in that the death rate is fairly low, we have good health insurance, and we're doing what we can to mitigate our exposure. It's about all we can do at this point.

Last weekend, we took the boys to the hot dog place downtown. We really like it but, sadly, they look to be on their way out. They're mostly doing catering at this point. We were actually lucky to catch them "in" last weekend. 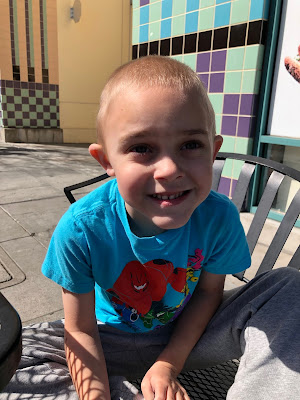 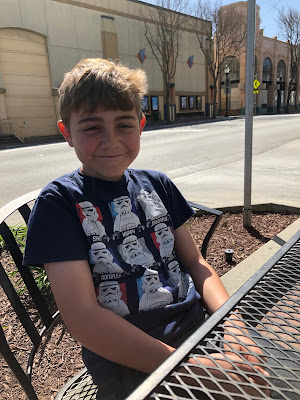 We did our usual things, too....like swimming lessons. 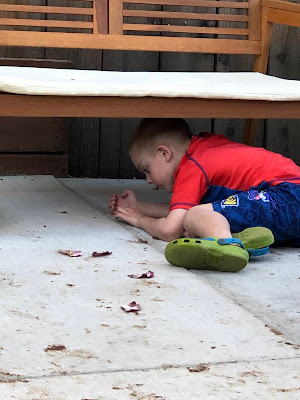 They finally put some seating outside, which is really nice when the warmer weather hits. I can't stand sitting in that sweatbox during the warmer months. So, I sat outside this past week (and worked on my Campfire Socks - that's actually when I took the photo). 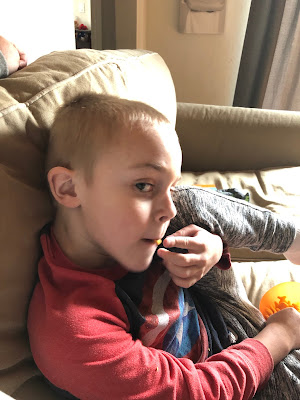 This is how Stormageddon sits from time to time. Leg crooked over his arm. Little weirdo, he is. He's just slightly less weird this week, though, as I finally got him to try bacon (and he liked it, of course). 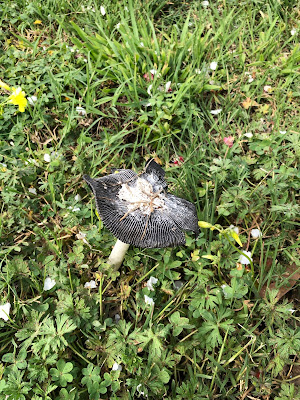 .....okay, this isn't food. I found a few rather large mushrooms growing in our sideyard this week. I actually could see this one from our driveway and, at the time, I didn't know what it was so I got out to investigate...and found this. There are a few more in the yard. I suppose they'll be taken care of when we mow this week. Or not.

Anyway, I hope you've had a lovely week and weekend. I still need to do a Stitches West thing......we'll see.
Posted by Renee Anne at 8:20 PM