Year NINE: Self-Imposed Year of Projects - Schedules are not my thing (Update #13)

Happy Sunday! It appears that schedules are not my thing. I don't know that any of us are surprised by this revelation. With that said, let's get going because this day is definitely not getting any longer.

Nope. Nothing new to see here. Move along now, sir.

Surprisingly, I've had some gains this week. I've started the second section of my Herbivore Shawl, which means I need to pay even more attention. It's not terribly difficult but because I'm still in the beginning few rows of the new section, I have to make sure I'm paying attention. It'll get easier as it gets bigger.

I also worked on my Abracadabra Socks this week, specifically during a Virtual Knitting Afternoon with Anzula Yarns yesterday. I started the main color of the sock this week and I think I'm almost halfway through the leg already, which is about 25 rounds. I need to double-check my numbers but I think I made the leg of the first one only 75 rounds total from the cuff to the heel flap (I usually do closer to 100 rounds). So, that's delightful.

I'm almost finished with the hood of the Baby Yoda sweater, as well. I need to knit one more row and Kitchener the back closed. Then come the ears. And then I can start the body of the sweater. I may have it done before summer hits, which is perfect. I think that was all the knitting I did this week.

California is still under Shelter-in-Place orders, which is fine for the most part. We go out to do the grocery shopping as needed but that's honestly about it (and we're not going that often). The weather hasn't been overly cooperative so we've not been doing much outside, much to the boys' chagrin. 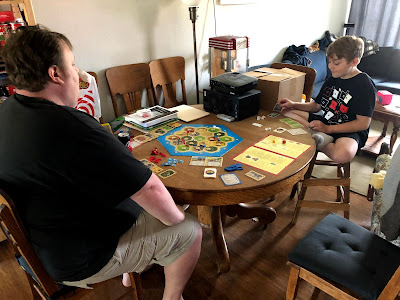 If you're unfamiliar, this is Settlers of Catan. We just got the original version (for now). Husband also got a version for the iPad so he could learn the rules better (there are a bunch of things to think about). Little Man seemed to enjoy it, which was the point.

That night, we introduced the boys to a classic: 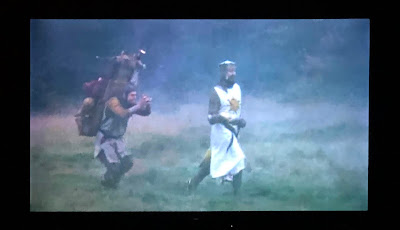 This is Monty Python and the Holy Grail. Husband and I often quote it at Little Man, specifically the scene about the Right to Self-Determination. We finally sat the boys down and watched it. Little Man did like it but it took him a bit to get into it properly. Stormageddon was kind of all over but at least he let us watch the movie.

Monday, we started a science experiment. I've always heard you could grow celery from the stump of one and I chopped up our celery and had the stump leftover. So, I put it in some water and now we wait.... 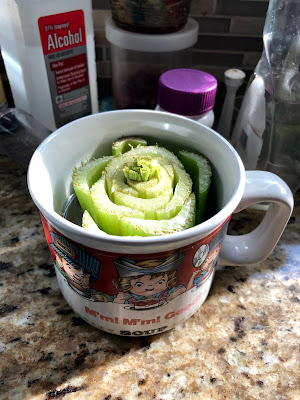 And it does work! This was after less than a day. It's currently about 1.5" tall and the leaves are starting to sprout outward from it. So, in a couple weeks, we should have another full stump of celery. Then we may have to do it again. I also decided to try cabbage but so far, that's not working. That's fine. It's an experiment.

Little Man had a class meeting this week. We have a computer set up in his room with the camera and all that. He could use some speakers but that's about it. He's having to spend much more time at the computer, which he's not used to and he's frustrated because he can't type as quickly as I can. I can't blame him but he's also resistant to learning. ::sigh:: 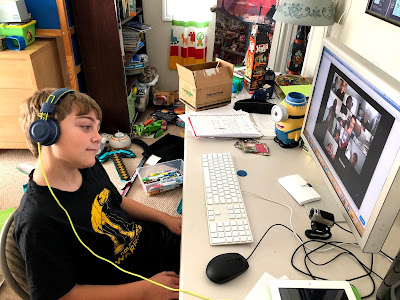 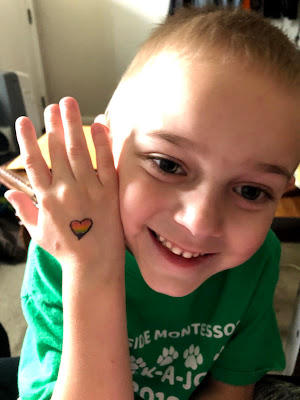 During Little Man's meeting, Stormageddon let me draw a rainbow heart "tattoo" on his hand. He was very proud of it. I did it with some felt tipped markers so it only stayed on for a day or so, even with all the handwashing we've been doing.

One of the things Little Man has to do for school is something called Mr. Journal, which is basically a writing/drawing thing they do in the morning. Of course, after one week, Little Man managed to lose his Mr. Journal in the house so we were making do with what I had (I bought him a new one yesterday morning). This is the poem he wrote earlier this week. 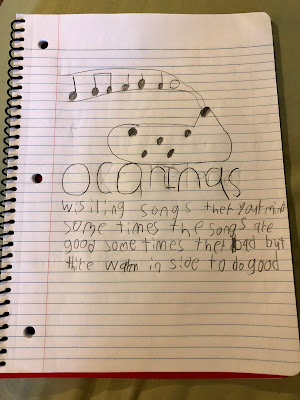 Both his teacher and I were super impressed with this (spelling issues aside). So, that may be shared with the class. We'll see.

Lastly, this is what I wanted to be doing this week: 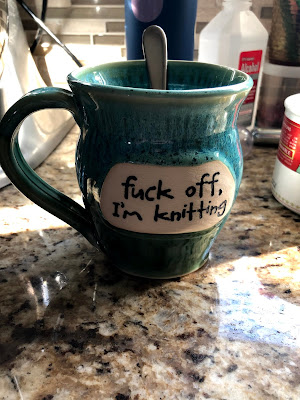 The mug is from Pawley Studios but I bought it from StevenBe. If I remember correctly, these ones are exclusive to StevenBe, which is fine. I was drinking tea (which I rarely do). For Christmas, one of the moms gave us some Snarky Teas and this one happened to be called Wake the Fuck Up Tea.

Anyway, I hope you've had a lovely quarantined week and weekend :)
Posted by Renee Anne at 5:18 PM