Happy Monday! I'm definitely late for my update. I've been confused about days for a week now and I think I'm finally back on track. Maybe. We'll see how things go.

It was a slow week for knitting. I only worked on one project: the Baby Yoda sweater. I've attached the sleeves and I'm working on the last little bit of the collar. I have maybe 7 rows left. Maybe. If I sit and do it, I could probably finish the knitting tonight. I don't think that's going to happen but I can dream, right?

I did not touch anything else. Maybe this week?

Last week was kind of a hot mess. Puppy has been being kind of a jerk and wanting to go out in the middle of the night, which is okay if he just wants to have a pee. I just put him on the leash, he goes, and that's that. When he wants to do the other thing, it's a half hour, minimum, of him prancing about in our backyard, and that's if he doesn't get distracted by the wildlife. Last week, he pulled that at least three nights in a row and that meant three afternoons where I just could not keep my eyes open long enough to get through an afternoon. Monday, we missed Stormageddon's occupational therapy video session because I fell asleep. I spent the next few days going back and forth to reschedule, which was on Friday (and it was fine, thankfully). Little Man was all over between his regularly scheduled meetings and a new one and his art therapy and his occupational therapy.....it was just a messy week. But, we did manage a few fun things... 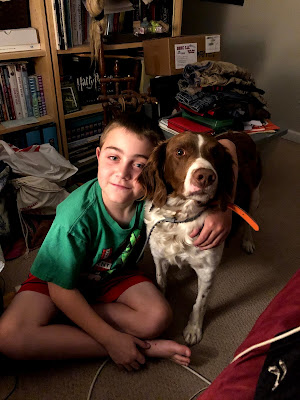 Little Man and his (naughty) Puppy. I forgot to mention...twice in the last week he's pooped on the carpet after not doing it outside after a half-hour (or more) of prancing about, including this morning. Distracted by wildlife. Hrm. It's a good thing Puppy is cute.

The boys got an idea in their heads after I showed Little Man an article I found on Facebook for forts made with Ikea furniture. This is what resulted with our couch and a couple sheets and blankets. 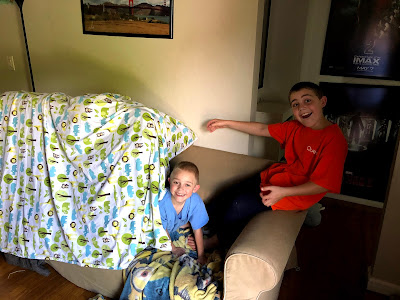 Little Man also made a setup outside. The boy really needs to build a huge fort but we just don't have the space. 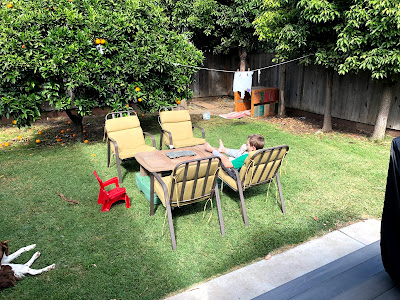 You can also see Puppy's house in the back and a rope going across the trees. He keeps trying to hang things and make pulleys and such. I shouldn't complain. He's being creative and using his innate understanding of mathematics and physics......but he won't do his schoolwork. ::sigh::

Speaking of his creativity, he's also been on a Legend of Zelda kick wherein he's been playing Breath of the Wild, Twilight Princess, and Ocarina of Time, all on different gaming consoles. That has also resulted in making things pertaining to Legend of Zelda. 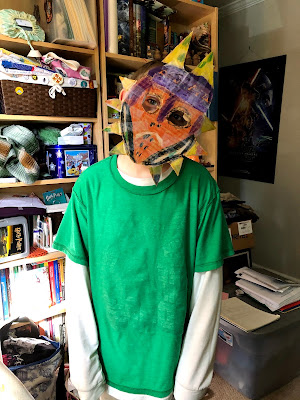 I'm not sure how he got this Majora's Mask to stick to his face because there's no obvious place to hold it and it doesn't have any sort of strap....but he made this while refusing to do homework today. I'm glad he's creative and not just sitting on his butt...but I need him to do some of his other schoolwork.

Anyway, that's about all that's happening around here. I hope you've had a good week and weekend!