This past weekend was spent doing so many things...I don't even know where to begin. I think I'm going to keep it really short and simple.

On Friday, went to Wisconsin Sheep & Wool Festival in Jefferson followed by a rehearsal wedding and rehearsal dinner.

Saturday was the wedding. Duh.

On Sunday, we went to the gift opening and I worked on the shawl when we got home (the one mentioned here, here, and here). I was supposed to have it finished on Friday but that didn't happen. I was so so so close...and I didn't even finish it on Sunday.

Monday was an uneventful day, except for knitting. Madison Knitters' Guild had their first meeting of the year on Monday. I was hoping to have the aforementioned shawl finished, at least, by then so I could show it off but that didn't happen. I actually finished it while I was at the meeting. Unfortunately, because the top half (the part that goes nearest to your neck) is in stockinette, it's going to need blocking. 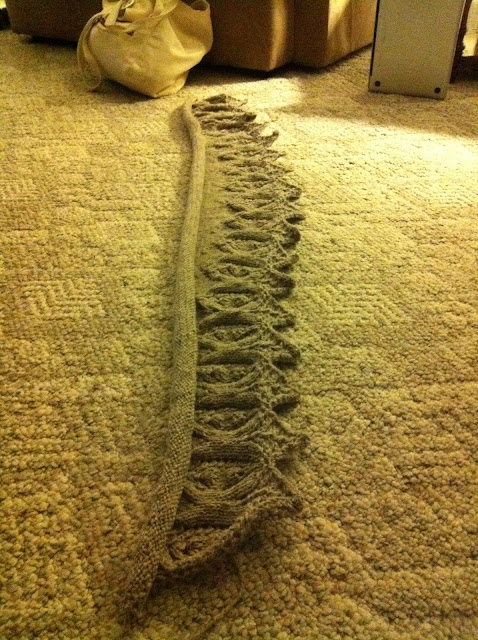 It turned out to be around 60" long (unblocked) and I didn't measure it's width because of the curling and such. I'd estimate that it's around 9" wide (unblocked). I don't expect it to grow too much with the blocking; it's just mainly to stop the curling and get some of the edging to lay correctly. 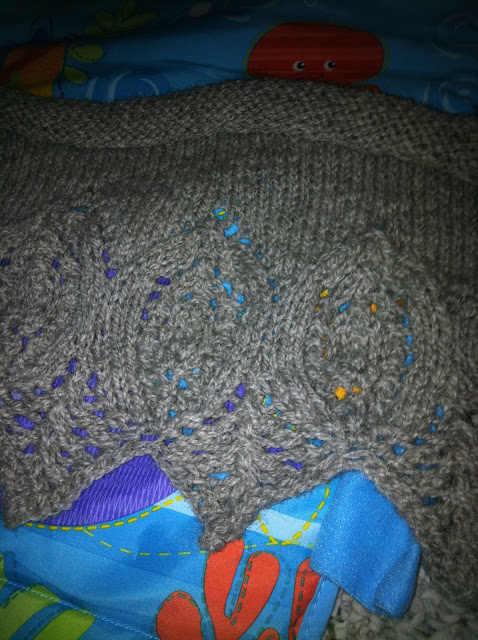 Here's a close-up of the lace section at the bottom.

Anyway, here's the specifications:
Pattern: New Moon Shawl
Yarn: Blackberry Ridge Traditional Colors Medium Weight
Needles: Knit Picks Interchangeables US #8 (either a 24" circular or a 32" circular...not sure which)
Modifications: I used a worsted-ish yarn, which the pattern calls for...but I did it on US #8, rather than the US #7 needles that it calls for.


So, now that the shawl is finished (sans blocking), I'm going to hit some of those other WIPs hard...really hard. I've had my Basic Socks on needles for quite awhile now. I have the first sock finished and I just finished turning the heel on the second sock. I'll probably be able to get a pair of baby socks out of the remaining part of the skein when I'm finished. Maybe two...we'll see. I've also got my Skyp Socks going. I'm on the foot of the first sock. And I have a hat of my own design going...I think it's going to fit me. There's also the Giraffe that I'm making for Little Man. The most important WIP I have, however, is Little Man's Cobblestone Baby Blanket. I'm hoping to have it done by his first birthday in November...Christmas, at the absolute latest.

On top of that, I'm supposed to be making Sweet Girl (Husband's niece) the Hippo from Itty-Bitty Toys and Husband asked me if I would make a Baby Surprise Jacket for a friends' baby (due on Halloween).

You can find more WIP Wednesday projects by visiting Tami's Amis and Other Creations
Posted by Renee Anne at 10:08 AM