Apparently it's Sunday....again........and I've been neglecting my blog. That isn't to say I haven't been thinking about it because I have been. I just haven't had time to sit down and write anything of value. Oh well.

I'm going to keep this short and sweet (if that's even possible).

Basically, my 12th week of my Self-Imposed Year of Projects is exactly the same as last week's (go look) with one exception: I've decided to remove the Brooke Baby Afghan from the list and replace it with the Baby Chalice Blanket.

I've made some progress on my Vanilla Socks and I might even photograph them this week as they're a bit longer than they were in the photo on my project page.

I've also made some more progress on my Pine Forest Baby Blanket. I'm still working on the pink middle section and I think I've figured out that I'm going to have to do somewhere between 12-18 repeats just to accommodate for the length that I want. The green part (the first three skeins) was approximately 12" long; in theory, that means the other side of the pink will also be approximately 12" long. If my blanket is approximately 34" wide, I'm going to want the blanket to be somewhere between 32"-36" long and that means I'm going to need at least 8" of pink, if not more, to make it so. I'll probably err on the side of making it a bit longer so it doesn't look wonky and unbalanced. It makes more sense for it to be longer in length than in width.

Hermione's Everyday Socks are coming along pretty well, too. I'm still in shock about the 20 rows of 1x1 ribbing...because of that, I'm going to have to do at least 10 repeats of the pattern (though I'll probably do at least 12 repeats) to accommodate for the length of the ribbing. This is all fine and well. I figure I could make the socks knee-high and it'd be fine because I have another skein of the same yarn...but I don't like to do math to account for my fat calves. So we'll just stick with mid-calf socks.

I thought we could use a photo of Little Man to break up the babble about my Year of Projects. Besides, he's cute and he's wearing my Snail Hat.

In other random events, I've started work on my office (again). For those of you that are unaware, we live in what was my grandparents' house. They designed and built the house in 1992 and there are a few (okay, a lot) of idiosyncrasies about the house...and they were extremely clean hoarders. They kept everything and everything had a place. It was really weird. Anyway, when we moved in, the office became a dumping ground. I had made a lot of headway (seriously, the room was actually useable as an office/workspace) and then we got the rest of the stuff from the condo and Little Man was born and it became a dumping ground all over again. It has progressively gotten worse because we've removed things from other rooms so that Little Man doesn't break them. We have our coffee table on it's side, a large-scale printer, books upon books, breakable things, etc. It's awful.

With all this talk of possibly moving across the country (which isn't entirely out of the realm of possibility yet), I've decided that I need to get a handle on some things. So, the other day, I took some "before" photos of my office. 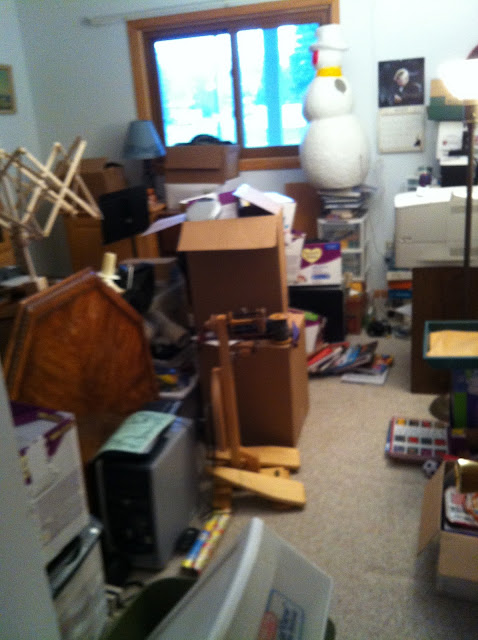 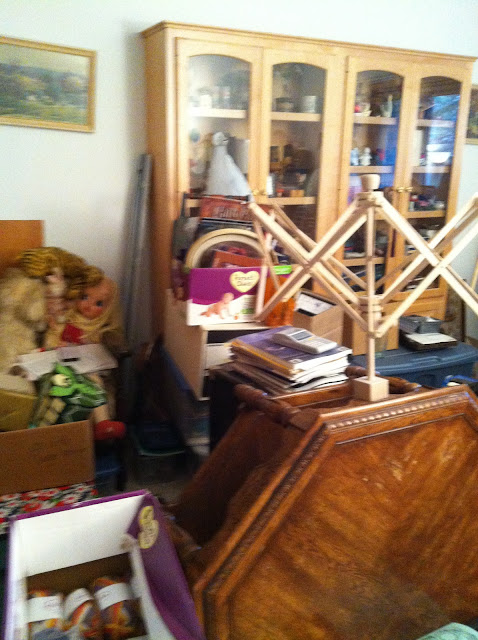 This is once you step into the room and look to the left. You can't see the closet in this photo but it's just out of the shot on the left. It's filled with stuff, mostly office supply type things. You'll also see the built-in cabinetry. It's full of stuff, mostly things that belonged to my grandparents but some things of mine have seeped in. The big blue rubbermaid bin in the corner on the right is my other grandmother's accordion (it's in it's own box, which is falling apart; hence the bin). 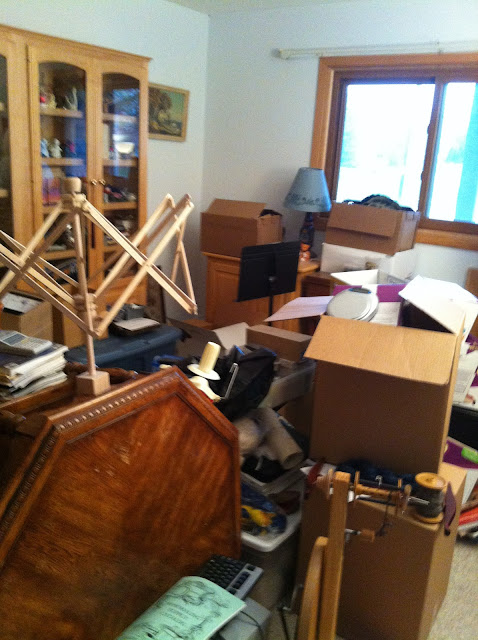 This is if I turn about 45° from the last shot. You might be able to see my ball winder (near my swift), a better view of my spinning wheel, a music stand, another cabinet, and piles and piles of stuff.

It was an awful mess. I spent about 3 or 4 hours in there last week. I went through a lot of stuff, moved some stuff around, did some sorting, photographed some things, threw some other things out...the usual stuff. 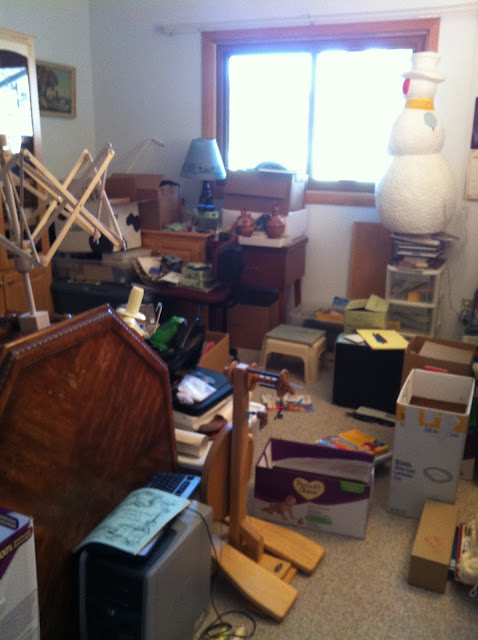 Yes, I realize that the room doesn't look any better. But, I had some things sorted out for Freecycle, Craigslist, the local Buy & Sell shop, items to be kept, other donations, and garbage. 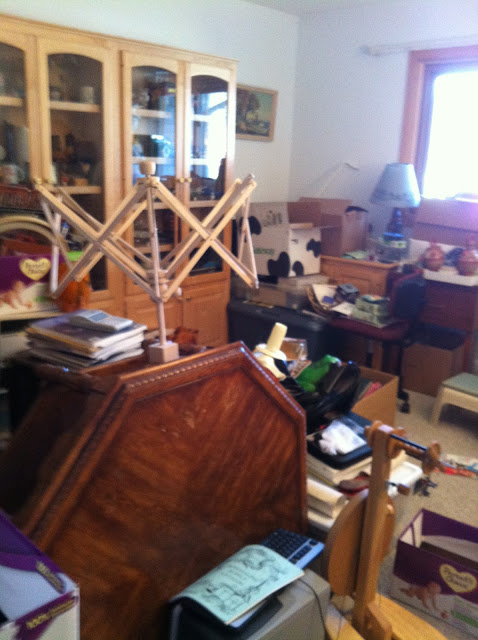 I actually made a walkable path through the room. It's hard to see but I swear, it's there. 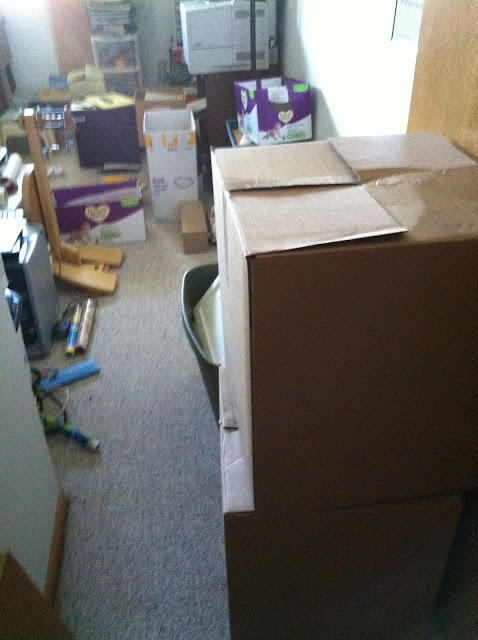 This was one of my problems. I have two big boxes of sheep's wool that I purchased from a local lady (I say "lady" but she's probably not much older than I am). I'm not quite sure what to do with them. They're not heavy...just awkward. So, right now, they're by the door.

Since then, a lot of things have left the room. I took a huge box of teachery magazines up to Madison for a UW student via Freecycle. She's currently student teaching, set to graduate in May...she can use them and they're just collecting dust around here. I also gave a bunch of office supplies to one of my friends for her business. Between those two alone, that was three of those large boxes of stuff that went away. I have some items up for sale on Craigslist and a few more on Freecycle that haven't been claimed yet.

As long as I get some time in there, it'll get done.

Yesterday, Husband and I worked on the outside of the house. Husband mowed the lawn (it needed it as it hadn't been done since September) and did some tree & bush trimming. I weed whacked and did some raking. I cleaned out along the house where last year's Hosta remnants were (and dead leaves and grass clippings). It actually looks like someone lives here. It's not great by any means but it was some progress.

Tomorrow we're going to tackle the garage while one of my friends watches Little Man. It's the last garbage pickup of the month so they do the "big" stuff......hence why we're going after the garage.

Anyway, another photo of Little Man...


Perhaps I'll have a WIP Wednesday this week. Don't count on a FO Friday though...
Posted by Renee Anne at 10:00 PM