I'll admit that I'm writing this a day early as we're doing another 5K this morning and meeting friends later in the day.....so, we'll just go with it :)

It appears that I finished another project this past week :) I've not done an FO Friday for either of the hats, however. You can see the second one on the project page (which is linked above). The pattern was also released this past week. Personally, I like my worsted version better but that may be because it's warmer. My DK version is a little too airy for my liking...which does not mean I'm not wearing it. It just depends on the weather.

But that's it, I swear...nothing else!

With the FO, I was able to work on some WIPs this past week. My Fire Socks are moving along. I finished the heel flap & turn, picked up gusset stitches, and I'm now working on the gusset decreases. I also pulled out my Pacific Shawl from it's pseudo-unintended-hibernation and worked a couple rows. I can only work a couple rows at a time because each row is well over 200 stitches at this point and I just can't go that long. They take forever. I think I watched 3.5 episodes of Daria the other night while working just two rows. I'm almost done with the second boarder repeat. When that's finished, I get to move the lifeline to a new home and start praying to the Knitting Gods to allow me to win at yarn chicken. I also pulled out the bunny I'm making for Stormageddon. I figure if I want it done by Christmas, I needed to get moving on it. The head & body are done and stuffed. I attached the ear parts together the other day. Both arms are knit but not stuffed. Both legs are knit but not stuffed. I have 3/4 of the first foot still on the needles. I need to finish that, make the other foot, make the tail, stuff the arms, legs, feet, and tail, sew pieces together, and do finishing touches (i.e., embroidery on the face, hands, and feet). It sounds like a lot but it's honestly not that much if I just sit and do it. Maybe six hours, total. I should time it. I also spent some time on the Vanilla Latte Socks during swimming lessons and other "down but still have to watch the baby" times. I haven't measured but I know they're hanging around at least five inches, if not longer...probably longer. Self-striping yarn is lovely.


I honestly don't even know why I continue to post these lists, other than to remind me that I am, in fact, batshit crazy and have no idea how long things take. Oh well. Moving along......


In other news, I'm sure things happened this week. Stormageddon is now 15 months old. He has his appointment later this month but I expect he's perfectly fine for his age. Little Man needed a day or so to get readjusted to going to school again. Even a couple days off just messes with him. ::sigh:: 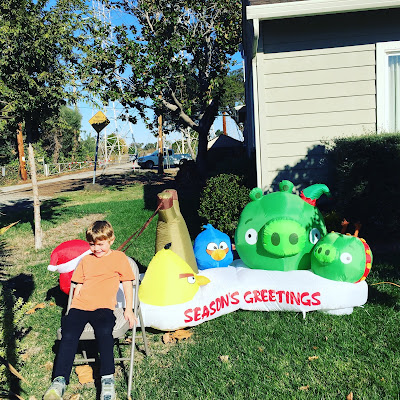 Little Man loves our outdoor decorations. Aside from the Angry Birds one he's posing in front of, we also have a blow-up Darth Vader holding a candy cane and Snoopy sitting on his house with Woodstock. 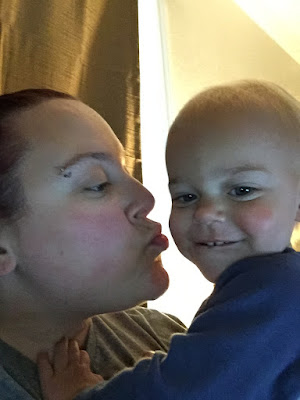 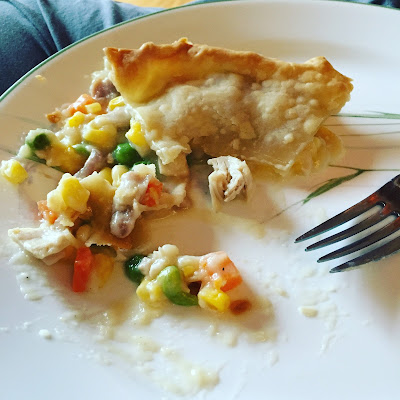 We had a significant amount of turkey leftover so I made some turkey pot pie this week. You cannot tell in this photo but Puppy is sitting right next to me, ready to steal my food off my plate. He's kind of a turd like that. We don't let him have people food but he will steal it if there's an opportunity. 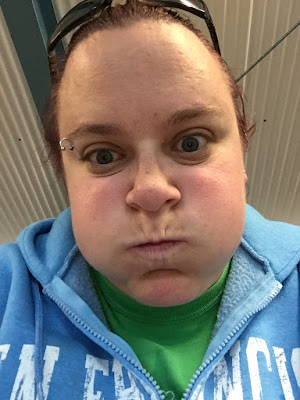 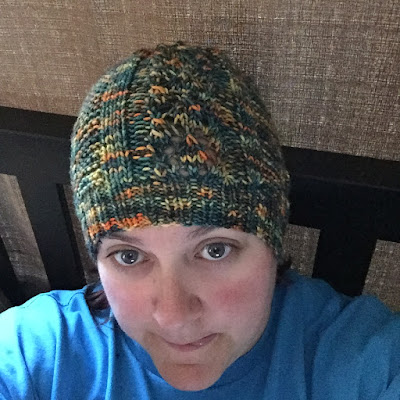 And, lastly, the finished Maple Slouch (2)....but this was before it had been washed/blocked. It's much softer and a little longer/bigger now. Exciting times.


This next week is going to be a bit crazy around here. Monday night is the mandatory kindergarten meeting for the school district. Tuesday night, Husband is taking Little Man to the farewell tour of Adam Savage & Jamie Hyneman (Mythbusters). Husband has jury duty on Wednesday. I have a dentist appointment on Thursday (and I'm praying that Husband isn't picked for jury duty so I have someone to watch the boys....). Friday will be the only "normal" day around here. ::sigh:: Busy week. I hope I have time to knit....

Anyway, I hope you're all having a lovely weekend!
Posted by Renee Anne at 12:00 AM