I've been quiet this week but things are going on, I promise :)

Oh hi, I finished something yesterday afternoon. I've been test knitting a hat for Veronica Parsons and I finished it. As it was just finished yesterday afternoon, there are no proper photos. Let's hope I can get some taken after it's been washed and dried and maybe even modeled by someone that isn't Little Man. We'll see how things go. But I have a finished :)

Most of this week's knitting was spent on the hat, though some progress was made on some design work. Okay, let's be honest: I spent some time digging through my stitch dictionaries and looking at written directions and trying to figure out charts because, really, charts are easier for some people (not me - I usually have to look at written directions first).......but, it was all about the hat, for the most part because the written directions were just giving me a headache and I didn't want to deal with them (I still don't).


Life continues to be interesting in our little corner of California.

After Stormageddon's ear infection and course of antibiotics, we had another lovely thing happen. I noticed a rash on his face earlier this week. He gets a little rashy and has dry skin for a moment or two, once in awhile. I didn't think too much about it until I noticed it had spread to his back, arms, and legs. It didn't appear to be bothering him but it was spreading, which is kind of concerning. So, off to the pediatrician. Again. Turns out that it's a non-allergic rash caused by the antibiotic he was on for his ear infection. She said that many kids get it right around the 9th or 10th day of antibiotics, the first time they have the antibiotic and that most of them never get it again. I don't remember Little Man having the problem but he also had issues with dry skin and he had his first ear infection around 4 months old. Soooooo.....that happened.

Little Man went camping with Husband. They left after soccer yesterday morning and I expect them back sometime this afternoon.

We had kind of a boring week around here, really. It's okay to have those. I rather like them sometimes. Of course, this week may be due, in part, to Stormageddon having been sick and I'm not working at 100% either (allergies, a lingering gob of ick in my throat, congestion, the usual upper respiratory garbage).

Whatever. This next week should be better.

Photos are lacking today......I haven't bothered to load photos from my phone. But, I do have a couple from last week in the pool :) 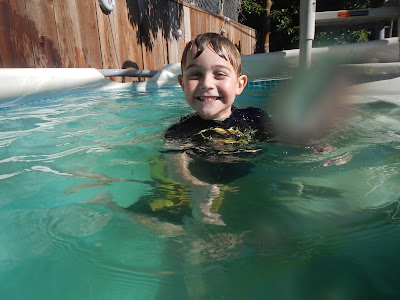 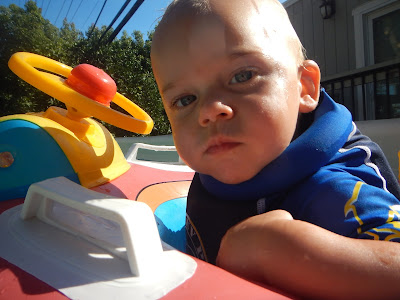 Both boys are little fish and love the water. In that respect, they are definitely Husband's children. I had swimming lessons as a child but I can't swim for squat. I don't like pools where I can't touch the bottom, I detest swimming in lakes/rivers (the idea of fish nibbling at my toes creeps me out)...I don't mind wading in the ocean but I won't go far......in short: can't swim. Husband can swim. He can swim pretty well, actually. But I can do other things he can't do so it works out.

Anyway, I hope you're having a lovely weekend :)
Posted by Renee Anne at 12:00 AM